You are here: Home / Domain Names / The Abandoned Wasteland DNForum.com is for Sale; Here’s Why It Still Has Value

NEW YORK – If you have not yet heard, and I am sure that you have, once popular domain name forum, DNForum.com, The Place to Talk Domains is for sale. Ownership says they’ll have it sold this week and I would not be at all surprised to see that happen, because even if no-one at all bids on it, I did.

That’s right, I put in a small [worst case scenario] offer for the website, and if I wanted to steal it for the best absolute price, I wouldn’t be drawing even more attention to it by writing about it, but I don’t care much either way.

So here’s why I still think it is a good site to acquire if you like domains and have a little bit of cash laying around. 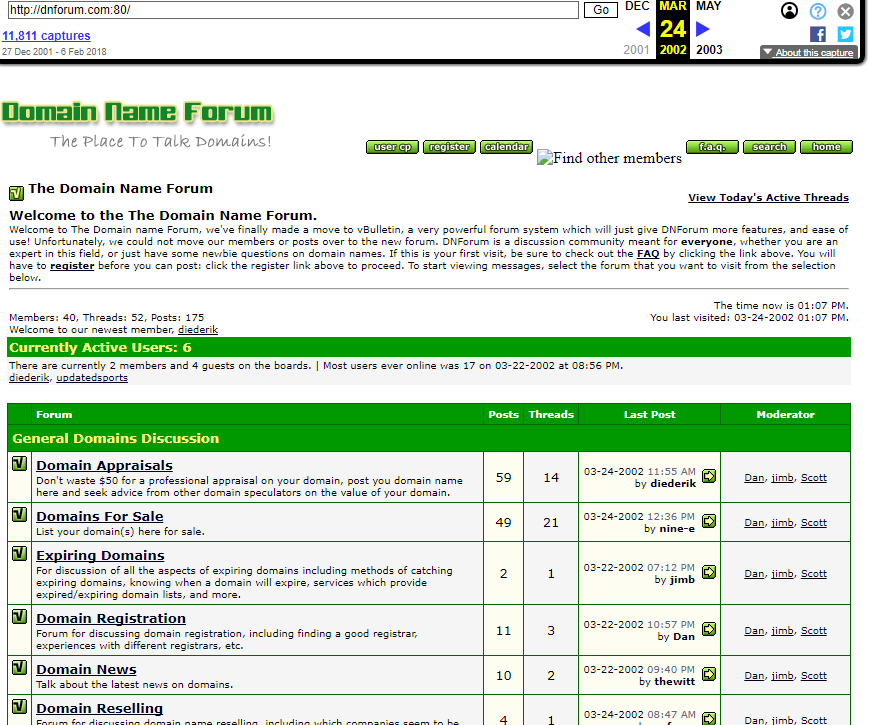 DNForum.com back in March 2004

So there you have it.

Starting something from scratch these days is near impossible. Back in the day I could through a site together in a couple of days and start getting search engine traffic and actually have a business within a few weeks. Try doing that today; it’s just not going to happen as easily. It’s going to take forever (if even it works at all). So starting something which is already known about, has existing traffic and a bazillion back-links is a whole lot easier.

Someone will buy the site. If I owned a competing domain forum I’d buy it just to redirect it and chalk it up as an advertising expense.

We all shall see what happens this week.

GREAT BRITAIN - As a potentially unexpected side-effect of Brexit – the withdrawal of the United Kingdom from the European Union in January 2020 – approximately 48,000 websites with the domain … END_OF_DOCUMENT_TOKEN_TO_BE_REPLACED

WEST PALM BEACH, FL - Usually Google is a leader in all things advertising, however, a recent update to policy by GOOG (NASDAQ) will have it following Facebook (FB) where the ad giant will implement … END_OF_DOCUMENT_TOKEN_TO_BE_REPLACED

PALM BEACH, FL - The Robinhood financial service company has confirmed a data security incident that has exposed full names or email addresses for approximately seven million customers, with a … END_OF_DOCUMENT_TOKEN_TO_BE_REPLACED