You are here: Home / Business / Why Purchase of “Tainted” DNForum.com by New Owners = Good Investment

NEW YORK, NY – As most of you have already heard, DNForum.com, has been purchased by domain name enthusiasts George Verdugo and Kevin Faler. The two now have their work cut out for them as they begin to rebrand the forum, once again, as “The Place to Talk Domains”. But they have got competition – fierce competition as there are many other domain forums out there, one of which is the extremely popular NamePros.com. 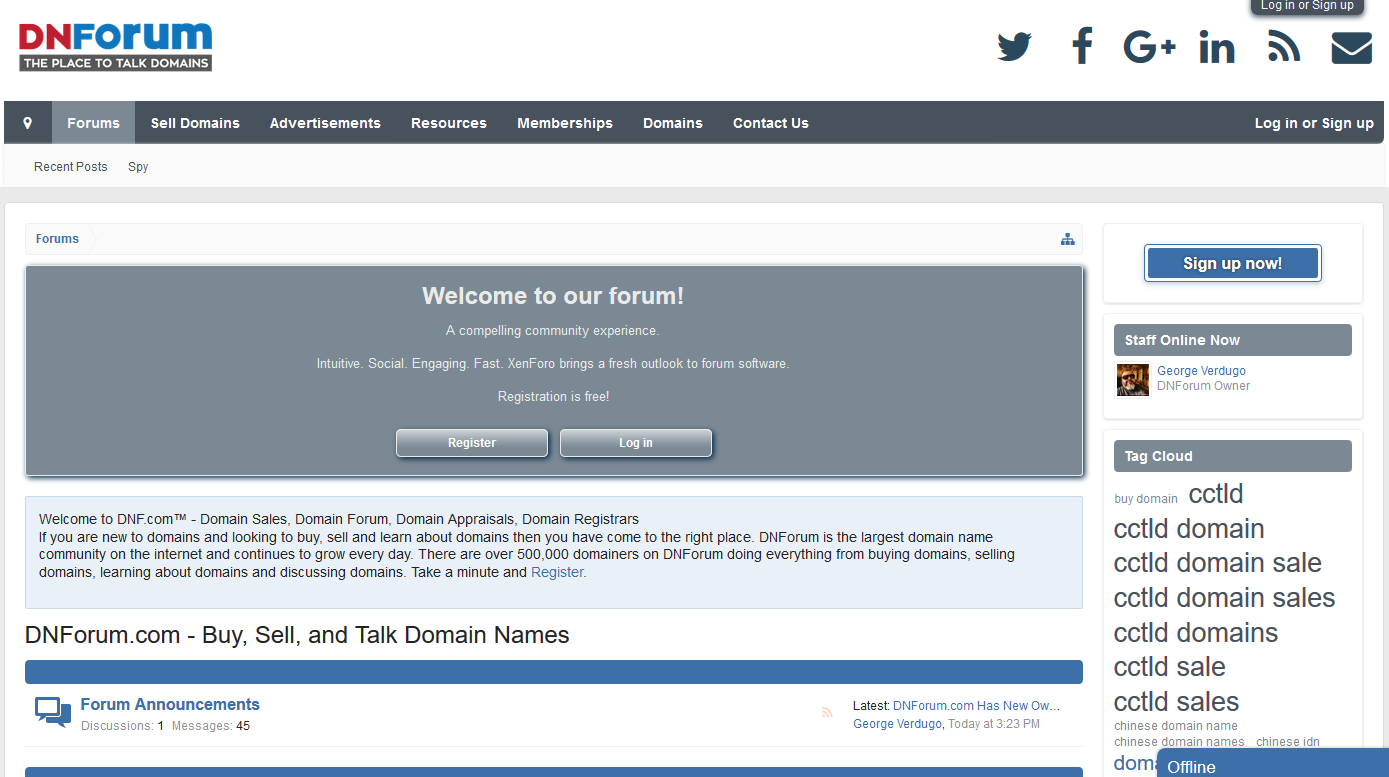 I ran into George at NamesCon and one of the first things I said to him was “Congratulations on the acquisition”. The second? You guessed it. “Does the former owner have anything to do with the business now?” – George assured me that, the former owner, Adam Dicker, does not. George said  Adam has “Nothing to do with it”. It is just himself and his partner Kevin.

I’d like to mention that I do not know Adam Dicker any more than any other forum member did and I do not want to get into any of the issues which have brought the forum down to begin with, (there seems to be hundreds of issues – some still open and unresolved). All I would like to say is that thank God I wasn’t involved in any of it, as the issues were serious enough to hurt many people (allegedly), destroy the sites reputation and close it down completely (February 2016) for some time. It returned later (Back in May 2016) and then died again (December 2016).

I had wondered why no-one had purchased it yet.

Now, with it relaunched, its new owners have to look at what has and has-not historically affected brands over time.

Here is why I think the forum has a great chance at beating-the-odds of many domainer comments that it is “forever dead” and “un-revivable”.

Additionally, here is another historic reason to consider:

Now, keep in mind that I know these are major brand examples below, with near limitless resources, but we’re talking about brand recovery, and is it possible to recover? The answer is yes.

Again, the above examples of branding recoveries are from major brands and do not necessarily compare to a niche website forum, but they are indeed examples that people could be severely hurt and/or even be killed, (in high numbers no less) from a brand and that brand can still recover.

So in my opinion, I feel the purchase of DNForum.com was a good one. I would suggest that George and Kevin read up on as much brand recovery stories as possible as they begin to re-brand and strategize on how to build back the forums good name with not only long time domainers, but new users as well. I’d figure spending about 50-75% of its income over the next year on just that. I wish them luck with it; building a brand is not easy, and I am sure re-branding one isn’t any easier, but its better, in my opinion, then starting from scratch.

Overall its hard building a name in any business niche, and DNForum.com already has one, albeit, a bad name, but if you ask any public relations expert, they will tell you sometimes bad press is good press.

“Evidently this boils down to increased awareness: The mere act of introducing something to a broader public — even by saying that it stinks — increases the chances that more members of that public will want it anyway,” the Times said.

WEST PALM BEACH, FL – According to the latest SEDO.com weekly domain sales report, a single word .net domain sold for $20,000.00. The domain name is Fashion.net which has a great deal of commercial … END_OF_DOCUMENT_TOKEN_TO_BE_REPLACED

WEST PALM BEACH, FL - Usually Google is a leader in all things advertising, however, a recent update to policy by GOOG (NASDAQ) will have it following Facebook (FB) where the ad giant will implement … END_OF_DOCUMENT_TOKEN_TO_BE_REPLACED

SAN FRANCISCO, CA - According to recent reports, a new data security incident has surfaced. DoorDash, a popular food delivery app, detected suspicious activity from the computer network of a … END_OF_DOCUMENT_TOKEN_TO_BE_REPLACED