You are here: Home / Archives for End User 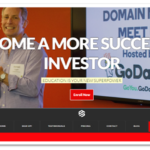 PALM BEACH, FL - “DN Academy”, one of the only online domain name educational platforms created by domain investor Michael Cyger, has been chosen by Sedo to act as its official training program for its domain name brokers. According to a press release issued by Sedo today, Sedo has entered into an agreement to train domain name brokers using a customized training program provided by the service. Sedo (an acronym for Search Engine for Domain Offers), is a domain name … END_OF_DOCUMENT_TOKEN_TO_BE_REPLACED

NEW YORK - A few weeks ago at NamesCon Global 2019 one of the industry’s best domain names, in my opinion, was acquired by Uniregistry, the brainchild of founder Frank Schilling, who operates the company from its Cayman Islands headquarters. As many in the domain industry were, Schilling was in attendance and won the highest bid on DomainNames.com for $370,000, one of the largest sales in the live auction. The remainder of domains which were not sold at the live event, … END_OF_DOCUMENT_TOKEN_TO_BE_REPLACED

NEW YORK, NY - Here is a list of single word English dictionary nGTLD domain names that have dropped (expired) within the last 24 hours (according to ExpiredDomains.net). One thing I do not understand is why a new domain registry would charge premium fees on domains that someone has already decided to let expire. For instance, love.xyz is $1,299.00 at Godaddy. If registries want to off-set their registry losses as much as possible, they would allow buyers to register these … END_OF_DOCUMENT_TOKEN_TO_BE_REPLACED

PALM BEACH, FL - There is something about success, even just moderate success, that you only experience and/or appreciate once you have gotten there. Something that many people often overlook, and it … END_OF_DOCUMENT_TOKEN_TO_BE_REPLACED

PALM BEACH, FL - Just because you see something in ‘search’ doesn’t mean someone else will see that same result. This is because more and more of the web, as well as the experience you receive on your … END_OF_DOCUMENT_TOKEN_TO_BE_REPLACED

PALM BEACH, FL – I have been thinking about this off and on for a few years now, but I have never really posted or written about it. That is because it is an awful prediction that I hate the idea of, … END_OF_DOCUMENT_TOKEN_TO_BE_REPLACED