NEW YORK, NY – A number of years ago Google’s then Chief Executive Officer, Eric Schmidt, began visiting the White House, often. I believe the talks were originally about cyber-security and it was around the time where the failed Obamacare website was falling apart. Also, around the same time there were lots of issues with Google being sued and investigated, issues such as the PRISM spying leaks and all sorts of anti-competitive and privacy lawsuits being launched against Google. It became apparent that Google was under a lot of serious pressure.

Sometime shortly thereafter, Google’s Eric Schmidt, the guy with the best brains for the business-end of Google, the guy who literally grew it to a super-powerhouse-cash-register, stepped down as CEO, and (my guess has always been that) he found that there could be something much more important for him to work on; keeping what he built alive against its mounting legal and political challenges.

Understanding the complexity and seriousness of the need (I guess, assume, have opinion that)  Schmidt created some sort of new strategic government-relations position for himself; something more of a board of directors which would specifically work in a ‘public relations’ capacity at Google in order to deal with all of the complex legal-political entanglements ahead. The position of CEO was then passed along to Google co-founder and techi Larry Page although there has been several management changes since that time.

Recently, rouge-media website Wikileaks released thousands of emails, some of which suggest some very cozy situations, in particular with Eric Schmidt and the Clinton Presidential Campaign. The question becomes very reasonable to assume and ask if Google could even possibly remain unbiased in its position with this level of involvement behind the scenes, and if not, at what price, or to what benefit. 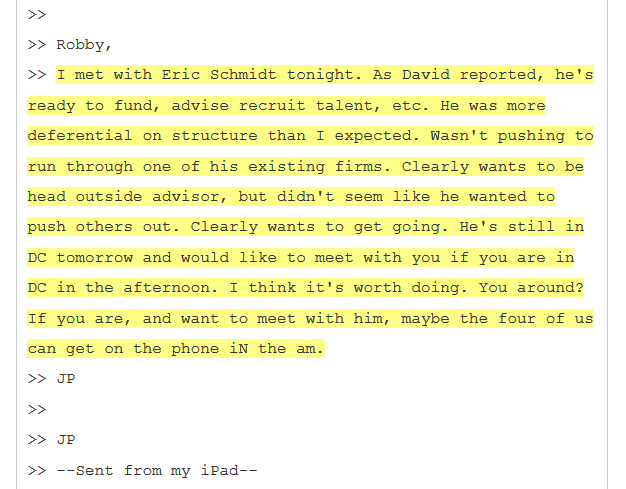 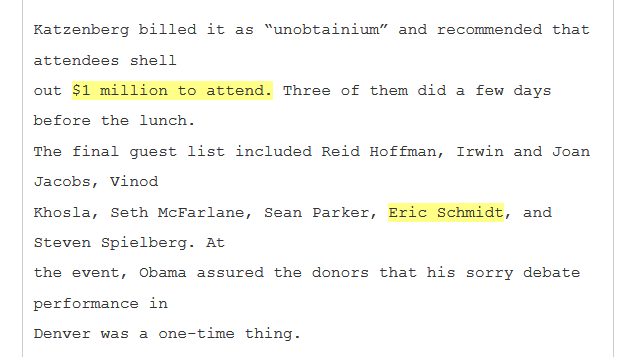 There is probably a lot more information out there about Google’s coziness with the Clinton’s, but, as I do not study it much, these are certainly interesting to find. You would think when it comes to a company the size of Google and its enormous amount of secret data on people, that they would, at some point, become a target to government and law enforcement, and could benefit greatly by cooperating and forming a strategic or even covert involvement in both processes.

My assumption, which appears on the surface to be at least somewhat accurate, guess – again, only my guess, is that the political position and involvement of Google into politics and the White House, has been getting much more significant in recent years.

This goes back to my quote; Google knows too much.

WEST PALM BEACH, FL - Usually Google is a leader in all things advertising, however, a recent update to policy by GOOG (NASDAQ) will have it following Facebook (FB) where the ad giant will implement … END_OF_DOCUMENT_TOKEN_TO_BE_REPLACED

SAN FRANCISCO, CA - According to recent reports, a new data security incident has surfaced. DoorDash, a popular food delivery app, detected suspicious activity from the computer network of a … END_OF_DOCUMENT_TOKEN_TO_BE_REPLACED