You are here: Home / Domain Names / Chicago.com Sale Price Likely $1M According to IRS Filings in 2017

NEW YORK, NY – According to a story appearing on domain industry satire site DomainGang.com, popular domain investor and researcher George Kirikos, has discovered (and recently tweeted) that he located financial documents which indicate what appears to be a sale price of the geographic domain name Chicago.com. 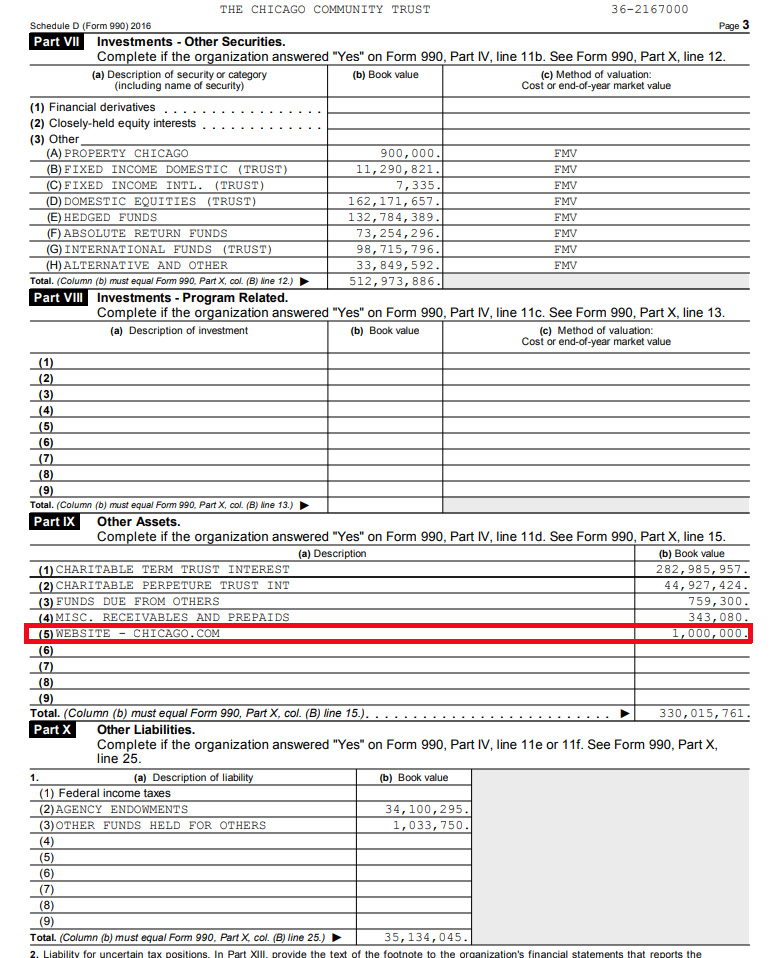 At the time the sale was first reported in the Chicago Times, the terms of the deal were undisclosed which left only speculation as to what the price might have been. Today that answer is, a bit more clear, or at least “more likely” to have been $1 Million, however, the form it is listed on, Schedule D, (Form 990) indicates the item under Part IX “Other Assets” column B as “book value” – this may or may not necessarily be a ‘purchase price’.

This was the second time the geographic domain name changed hands as it was first purchased in 2013 by the Sun-Times Newspaper parent Wrapports LLC, which used the site to showcase tourist information and events. The company also gained the sites founder Josh Metnic who became CTO after the acquisition. Wrapports LLC then sold Chicago.com to the Chicago Community Trust, a community organization formed to provide grants to local nonprofit institutions.

Wrapports wound up selling off all other assets of the Sun-Times Media Group in 2017 as it continued to haemorrhage losses in the area of $4.5 million per year.

It’s always great to see geographic domain names holding their own selling for 7 figures, often times with ‘no accompanying revenue or customers’ – really amazing. Seems to put them in a class all their own depending on the market, region and population, etc.

WEST PALM BEACH, FL - A new study has revealed that consumer email addresses are being collected by online login, registration, and newsletter subscriptions even before the user has manually … END_OF_DOCUMENT_TOKEN_TO_BE_REPLACED

WEST PALM BEACH, FL - Usually Google is a leader in all things advertising, however, a recent update to policy by GOOG (NASDAQ) will have it following Facebook (FB) where the ad giant will implement … END_OF_DOCUMENT_TOKEN_TO_BE_REPLACED

WEST PALM BEACH, FL - A new study has revealed that consumer email addresses are being collected by online login, registration, and newsletter subscriptions even before the user has manually … END_OF_DOCUMENT_TOKEN_TO_BE_REPLACED