You are here: Home / Archives for WebQuest

NEW YORK, NY - The following collaborated list includes all "public" domain names which have sold over the last 5 years which contain the words, "auto", "cars" and "automotive" (public sales according to NameBio). The list was built during my research for Cars Digital Inc. and added here for your enjoyment and learning … END_OF_DOCUMENT_TOKEN_TO_BE_REPLACED

NEW YORK, NY – Another list is being published today; this one is for new gTLD domain names which have been recorded at NameBio. All off these transactions have taken place over the last five years and this list ONLY contains the sales which are listed at NameBio - there are many hand registered and private or unrecorded domain sales which will not be here. Note: I only examined 100 domains max from each extension, highest dollar amounts first. Here is what I looked … END_OF_DOCUMENT_TOKEN_TO_BE_REPLACED 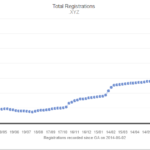 NEW YORK, NY - It’s now been near two years from when Google’s new parent company Alphabet Inc. decided to launch their new corporate website on the .xyz domain, naming it abc.xyz. It’s also been near two years from when .xyz founder Daniel Negari forecasted that Google’s surprising move would effectively end .Com dominance worldwide. Not much has happened. Aside from the 5.2 million .xyz domain names registered, according to NameStat, it has done nothing but decline since … END_OF_DOCUMENT_TOKEN_TO_BE_REPLACED

NEW YORK, NY - This is not going to be an all inclusive list as some domain sales go unreported and some I've heard of which are not listed, such as "Homes.Forsale" and "Houses.Forsale", but this will give you a good idea of the types of names changing hands and the types of dots which are building momentum. The following list of gTLDs were listed at NameBio as closing sometime during this year (2017). They are listed in alphabetical order by TLD. The list does not include … END_OF_DOCUMENT_TOKEN_TO_BE_REPLACED

WEST PALM BEACH, FL - Usually Google is a leader in all things advertising, however, a recent update to policy by GOOG (NASDAQ) will have it following Facebook (FB) where the ad giant will implement … END_OF_DOCUMENT_TOKEN_TO_BE_REPLACED

SAN FRANCISCO, CA - According to recent reports, a new data security incident has surfaced. DoorDash, a popular food delivery app, detected suspicious activity from the computer network of a … END_OF_DOCUMENT_TOKEN_TO_BE_REPLACED