You are here: Home / Archives for Pacific Telephone 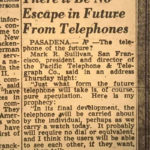 PALM BEACH, FL - In 1953, a telephone executive’s statement and prediction appeared in the April 11, 1953 issue of The Tacoma News Tribune. Below is a photograph of the story which has recently surfaced online and is getting a good deal of attention on social media sites such as Reddit, Twitter and Facebook from its accuracy. “Just what form the future telephone will take is, of course, pure speculation. Here is my prophesy: In its final development, the … END_OF_DOCUMENT_TOKEN_TO_BE_REPLACED

WEST PALM BEACH, FL - Usually Google is a leader in all things advertising, however, a recent update to policy by GOOG (NASDAQ) will have it following Facebook (FB) where the ad giant will implement … END_OF_DOCUMENT_TOKEN_TO_BE_REPLACED

SAN FRANCISCO, CA - According to recent reports, a new data security incident has surfaced. DoorDash, a popular food delivery app, detected suspicious activity from the computer network of a … END_OF_DOCUMENT_TOKEN_TO_BE_REPLACED