You are here: Home / Archives for British Indian Ocean 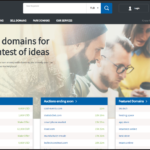 WEST PALM BEACH, FL – The domain name “509.com” sold at $106,500 this past week according to the latest SEDO.com weekly domain sales report. The numeric web address is currently hosting what appears to be a site in the middle of development or using a GoDaddy website builder program. Also notable is the .io domain “swap.io” that sold for a whopping $50,000 and a .club domain “ox.club” which fetched 10,000. The .io is a country code top-level domain (ccTLD) … END_OF_DOCUMENT_TOKEN_TO_BE_REPLACED

NEW YORK, NY – According to NameBio, there were a total of 2,927 “reported” .IO domain sales over the last 5 year period. These top 100 total $993,953.00 in sales. The highest reported sales on this list were the domains “Tank.io” for $60,000.00 with the second as “Cloud.io” for $45,000.00 (Neither of which are developed). .io is a country code top-level domain (ccTLD) assigned to the British Indian Ocean Territory. The .io domain is administered by the Internet Computer … END_OF_DOCUMENT_TOKEN_TO_BE_REPLACED

GREAT BRITAIN - As a potentially unexpected side-effect of Brexit – the withdrawal of the United Kingdom from the European Union in January 2020 – approximately 48,000 websites with the domain … END_OF_DOCUMENT_TOKEN_TO_BE_REPLACED

WEST PALM BEACH, FL - Usually Google is a leader in all things advertising, however, a recent update to policy by GOOG (NASDAQ) will have it following Facebook (FB) where the ad giant will implement … END_OF_DOCUMENT_TOKEN_TO_BE_REPLACED

PALM BEACH, FL - The Robinhood financial service company has confirmed a data security incident that has exposed full names or email addresses for approximately seven million customers, with a … END_OF_DOCUMENT_TOKEN_TO_BE_REPLACED