You are here: Home / Archives for Stability 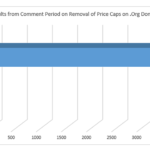 PALM BEACH - On June 30, 2019, ICANN (the Internet Corporation for Assigned Names and Numbers) announced that it had renewed its Registry Agreement with Public Interest Registry which operates the .org top-level domain. At major issue was whether the agreement would be renewed “as-is” with long-standing price caps removed. After public outcry a comment period was held with just six (“6”) [about 0.18%] out of 3,252 comments being in favor of removing the price caps; … END_OF_DOCUMENT_TOKEN_TO_BE_REPLACED

NEW YORK - In 1997, the United States government under then President Clinton began processes to remove its control over the Domain Name System by creating research and dialog on how control of domain names and IP addresses should be handled in the future - by a non-profit organization in the private sector. This resulted in a document which has become known as "The Green Paper" originally named "A Proposal to Improve the Technical Management of Internet Names and … END_OF_DOCUMENT_TOKEN_TO_BE_REPLACED

GREAT BRITAIN - As a potentially unexpected side-effect of Brexit – the withdrawal of the United Kingdom from the European Union in January 2020 – approximately 48,000 websites with the domain … END_OF_DOCUMENT_TOKEN_TO_BE_REPLACED

WEST PALM BEACH, FL - Usually Google is a leader in all things advertising, however, a recent update to policy by GOOG (NASDAQ) will have it following Facebook (FB) where the ad giant will implement … END_OF_DOCUMENT_TOKEN_TO_BE_REPLACED

PALM BEACH, FL - The Robinhood financial service company has confirmed a data security incident that has exposed full names or email addresses for approximately seven million customers, with a … END_OF_DOCUMENT_TOKEN_TO_BE_REPLACED